A grain of wheat 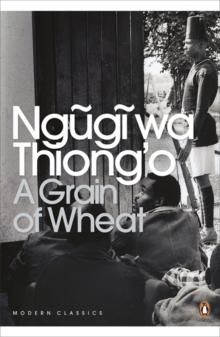 Se flere produktegenskaper
169,-
A masterly story of myth, rebellion, love, friendship and betrayal from one of Africa's great writers, Ngugi wa Thiong'o's A Grain of Wheat includes an introduction by Abdulrazak Gurnah, author of By the Sea, in Penguin Modern Classics.It is 1963 and Kenya is on the verge of Uhuru - Independence Day. The mighty british government has been toppled, and in the lull between the fighting and the new world, colonized and colonizer alike reflect on what they have gained and lost. In the village of Thabai, the men and women who live there have been transformed irrevocably by the uprising. Kihika, legendary rebel leader, was fatally betrayed to the whiteman. Gikonyo's marriage to the beautiful Mumbi was destroyed when he was imprisoned, while her life has been shattered in other ways. And Mugo, brave survivor of the camps and now a village hero, harbours a terrible secret. As events unfold, compromises are forced, friendships are betrayed and loves are tested.
Flere i samme serie
Merk produktene som skal legges i handlekurven
×