Chamberlain, Churchill and the road to war 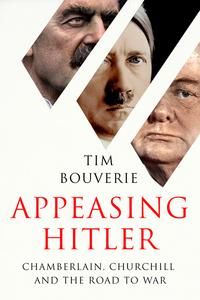 Se flere produktegenskaper
199,-
On a wet afternoon in September 1938, Neville Chamberlain stepped off an aeroplane and announced that his visit to Hitler had averted the greatest crisis in recent memory. It was, he later assured the crowd in Downing Street, `peace for our time'. Less than a year later, Germany invaded Poland and the Second World War began.Appeasing Hitler is a compelling new narrative history of the disastrous years of indecision, failed diplomacy and parliamentary infighting that enabled Nazi domination of Europe. Beginning with the advent of Hitler in 1933, it sweeps from the early days of the Third Reich to the beaches of Dunkirk. Bouverie takes us into the backrooms of 10 Downing Street and Parliament, where a small group of rebellious MPs, including the indomitable Winston Churchill, were among the few to realise that the only choice was between `war now or war later'. And we enter the drawing rooms and dining clubs of fading imperial Britain, where Hitler enjoyed surprising support among the
×