the ocean of the future 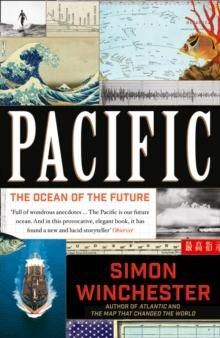 Se flere produktegenskaper
179,-
Travelling the circumference of the truly gigantic Pacific, Simon Winchester tells the story of the world's largest body of water, and - in matters economic, political and military - the ocean of the future.The Pacific is a world of tsunamis and Magellan, of the Bounty mutiny and the Boeing Company. It is the stuff of the towering Captain Cook and his wide-ranging network of exploring voyages, Robert Louis Stevenson and Admiral Halsey. It is the place of Paul Gauguin and the explosion of the largest-ever American atomic bomb, on Bikini atoll, in 1951. It has an astonishing recent past, an uncertain present and a hugely important future.The ocean and its peoples are the new lifeblood, fizz and thrill of America - which draws so many of its minds and so much of its manners from the sea - while the inexorable rise of the ancient center of the world, China, is a fixating fascination. The presence of rogue states - North Korea most notoriously today - suggest that the focus of the respons