Project: A protective roof over a spring water source in Jilin province, China 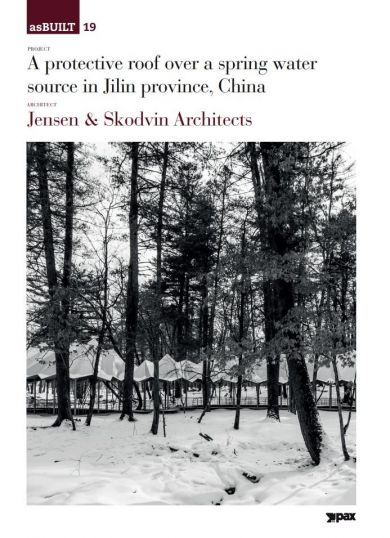 Se flere produktegenskaper
399,-
The Nongfu Spring water company has a tapping factory in Changbai Mountain National Park Reserve, in the Jilin Province, close to the North Korean border. From the high rafted industrial hall, a path weaves its way through a dense forest. Jensen and Skodvin architects (JSA) has designed a parametric path bending horizontally like a bicycle chain, adapting to the forest floor. The source is protected by a roof made from thin steel plates, welded together in a distorted saddle roof geometry, forming a surprising, minimalist and lightweight structure.

When seen from above, the canopy looks like a Chinese dragon. When seen from the path in sunlight, which causes variations in the reflection and shadowing, the canopy brings to mind a piece of origami, folded and set afloat in the woods. When seen in the dark, it looks like a giant rock that for some strange reason has lodged itself between the trees. Underneath the canopy, right by the spring, the irregular structure of thin steel plates appears weighty and protective, Karl Otto Ellefsen writes in his essay Spring Water.

With this work, JSA has reapplied the site-specific and tectonic lessons of their Norwegian projects within an entirely different culture, with striking results.
Flere i samme serie
Merk produktene som skal legges i handlekurven
×