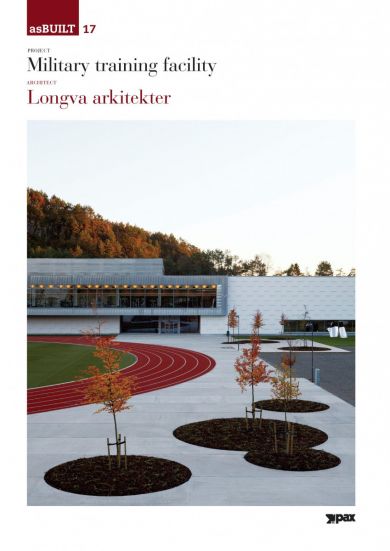 Se flere produktegenskaper
399,-
The Haakonsvern Training Facility at the main base of the Norwegian Navy in Bergen, is an elaborate piece of work, well detailed, easily maintained because of the high quality of the materials, and both spatially complex and conceptually clear. The building has granted Longva architects, both the Houens Fond diploma (the highest ranking award in the Norwegian architectural system) and the Norwegian Defence Estates Architectural Prize given by the Norwegian Defense Estates Agency (NDEA).

In his essay Karl Otto Ellefsen argues that Knut Longva's architectural approach and the NDEA regulations to improve architectural quality, made a perfect fit: the two parties meet in the concept of nøkternhet, their common denominator. In English, this Norwegian concept may translate as sober or soberly: This is an architecture displaying sobriety and moderation. Knut Longva graduated from ETH Zurich and has not been domesticated into a Scandinavian tradition or an Oslo school way of conceptualizing and designing. The training facility might be read as what has been termed a rejoice in Swiss rigour as well as an adaption to the local context, with the aim of contributing to a contemporary unity at the naval base, corroborating the geometrical, concrete-white volumes of the 1950s and 1960s as a model for new architecture.

Karl Otto Ellefsen is professor in architecture and urbanism at The Oslo School of Architecture and Design. He is among the founding editors of the asBUILT series.
Flere i samme serie
Merk produktene som skal legges i handlekurven
×