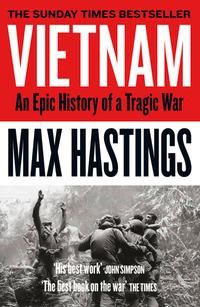 Se flere produktegenskaper
199,-
Vietnam became the Western world's most divisive modern conflict, precipitating a battlefield humiliation for France in 1954, then a vastly greater one for the United States in 1975. Max Hastings has spent the past three years interviewing scores of participants on both sides, as well as researching a multitude of American and Vietnamese documents and memoirs, to create an epic narrative of an epic struggle. He portrays the set pieces of Dienbienphu, the Tet offensive, the air blitz of North Vietnam, and less familiar battles such as the bloodbath at Daido, where a US Marine battalion was almost wiped out, together with extraordinary recollections of Ho Chi Minh's warriors. Here are the vivid realities of strife amid jungle and paddies that killed 2 million people. Many writers treat the war as a US tragedy, yet Hastings sees it as overwhelmingly that of the Vietnamese people, of whom forty died for every American. US blunders and atrocities were matched by those committed
Flere av samme forfatter
×