Harry Potter and the prisoner of Azkaban 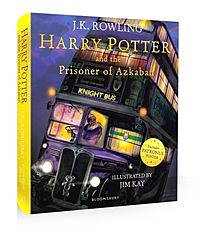 Se flere produktegenskaper
249,-
Jim Kay's dazzling depiction of J.K. Rowling's wizarding world has won legions of fans since the first Illustrated Edition of the Harry Potter novels was published in hardback in 2015, becoming a bestseller around the world. This irresistible smaller-format paperback edition of Harry Potter and the Prisoner of Azkaban perfectly pairs J.K. Rowling's storytelling genius with Jim Kay's illustration wizardry, bringing the magic of Harry Potter to new readers with full-colour pictures and a handsome poster pull-out at the back of the book. This edition has been beautifully redesigned with selected illustration highlights, and is packed with breathtaking scenes and unforgettable characters - including Sirius Black, Remus Lupin and Professor Trelawney. The fully illustrated edition is still available in hardback. Fizzing with magic and brimming with humour, this inspired reimagining will captivate wizards and Muggles alike, as Harry, now in his third year at Hogwarts School of Witchcraft and Wizardry, faces Dementors, death omens and - of course - danger.
Flere i samme serie
Merk produktene som skal legges i handlekurven
×