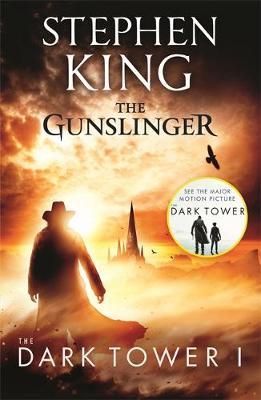 Se flere produktegenskaper
169,-
The Dark Tower is soon to be a major motion picture starring Matthew McConaughey and Idris Elba, due in cinemas August 18, 2017.'The man in black fled across the desert, and the gunslinger followed.' The iconic opening line of Stephen King's groundbreaking series, The Dark Tower, introduces one of his most enigmatic and powerful heroes: Roland of Gilead, the Last Gunslinger. Roland is a haunting figure, a loner, on a spellbinding journey toward the mysterious Dark Tower, in a desolate world which frighteningly echoes our own. On his quest, Roland begins a friendship with a kid from New York named Jake, encounters an alluring woman and faces an agonising choice between damnation and salvation as he pursues the Man in Black.JOIN THE QUEST FOR THE DARK TOWER...THE DARK TOWER SERIES:THE DARK TOWER I: THE GUNSLINGER THE DARK TOWER II: THE DRAWING OF THE THREE THE DARK TOWER III: THE WASTE LANDS THE DARK TOWER IV: WIZARD AND GLASS THE DARK TOWER V: WOLVES OF THE CALLA THE DARK TOWER VI: SONG OF SUSANNAH THE DARK TOWER VII: THE DARK TOWERTHE WIND THROUGH THE KEYHOLE: A DARK TOWER NOVEL
4 stars
4 av 5 stjerner (101) 4 0 5 101
5 stars
46%
4 stars
29%
3 stars
22%
2 stars
2%
1 stars
2%