The Things We Don't Do 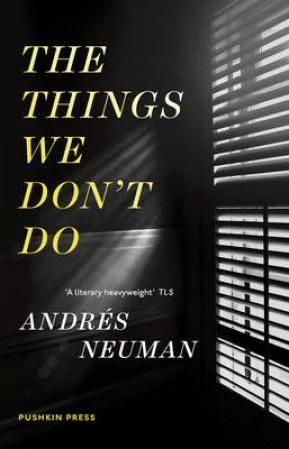 Se flere produktegenskaper
149,-
Inspired by Borges and Cortazar, and echoing Vila Matas and Zarraluki, Neuman regards both life and literature's big subjects - identity, relationships, guilt and innocence, the survival of extreme circumstances, creativity and language - with a quizzical, philosophical eye. Shining from the page with both irony and mortal seriousness, these often tragicomic 'stories of ideas' vacillate between the touching and the absurd, in the best tradition of Spanish storytelling.This is the first ever English collection of Andres Neuman's short fiction, containing thirty-five short stories and four sets of 'Twelve Rules for a Storyteller'.Andres Neuman was born in Buenos Aires in 1977, and grew up and lives in Spain. The son of Argentinian emigre musicians, he has published numerous novels, short stories, essays and poetry collections. Pushkin Press also publishes his novels Talking to Ourselves and Traveller of the Century, which was awarded the Alfaguara Prize and the National Critics Prize, and shortlisted for the Independent Foreign Fiction Prize and the International IMPAC Dublin Literary Award.
×