end of the world book3 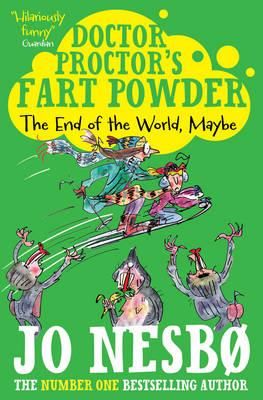 Se flere produktegenskaper
149,-
Full of humour and witty dialogue, Jo Nesbocreates wonderfully weird characters and lets his imagination run wild in his Doctor Proctor series. A must read for fans of David Walliams and Roald Dahl. Everyone is hooked on the hottest competition on TV, The NoroVision Choral Throwdown!Everyone, that is, except for Doctor Proctor, Nilly and Lisa, who are far too busy having fun to watch TV. But when people start acting oddly, the three friends begin to suspect that there's more to the show... Can it really be hypnotising everyone? With crazy inventions,half-men half-frogs, a moon chameleon invasion and plenty of super-sonic bottom burps, this is going to be the gang's most explosiveadventure yet! Can they stop an alien invasion in its tracks, or is this actually the end of the world?
4 stars
4 av 5 stjerner (1329) 4 0 5 1329
5 stars
53%
4 stars
26%
3 stars
14%
2 stars
4%
1 stars
2%
Passer for 6-9