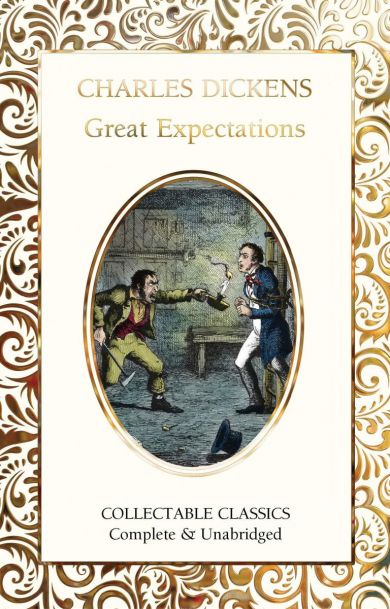 Se flere produktegenskaper
199,-
The FLAME TREE COLLECTABLE CLASSICS are chosen to create a delightful and timeless home library. Each stunning edition features deluxe cover treatments, ribbon markers, luxury endpapers and gilded edges. The unabridged text is accompanied by a Glossary of Victorian and Literary terms produced for the modern reader.Dicken's cast of characters, from the orphan Pip, Miss Haversham and Estella to the aptly named Magwitch takes the reader through a Victorian society riven with social ills, and misplaced ambition. Pip, a blacksmith's apprentice encounters and helps the escaped convict Magwitch who subsequently repays the boy with a secret fortune. Pip misunderstands the source of elevation, thinking it comes from the high society of Miss Haversham and her cold-hearted daughter whom he adores.His wilfull naivety is exposed throughout as Estella's disdain for Pip makes him try ever harder, to the detriment of `joe Gargery and Mrs Joe, the good people who raised him in poverty at the forge. Ultimately Miss Haversham burns to death in a fire and Magwitch dies in prison leaving a chastened Pip without his fortune. At the end all is resolved when finally he wins Estella's heart.