seven days to be your best self 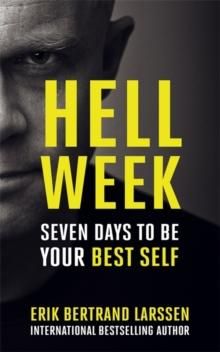 Imagine your life as a straight line. Now imagine that you could break that line and leave behind all your regular habits and nagging doubts for just seven days. Hell Week shows how you can change your life's path in a single week, replacing your old self with your best self, by going through a specially tailored (and totally safe) version of the elite military exercise where participants are pushed to the limit to find out just how much they can take. Hell Week is about defeating limiting beliefs and demonstrating that you are capable of far more than you ever thought - and maintaining that level of performance for the rest of your life.Norway native Erik Bertrand Larssen is many things: a veteran paratrooper who served in Bosnia, Kosovo, and Afghanistan, a successful entrepreneur, and a mental coach. He has helped catapult the success of countless high-achievers, including Microsoft and Stat Oil executives and Olympic medalists Martin Sundby and Suzann Pettersen. His lif
4 stars
4 av 5 stjerner (35) 4 0 5 35
5 stars
60%
4 stars
26%
3 stars
9%
2 stars
6%
1 stars
0%