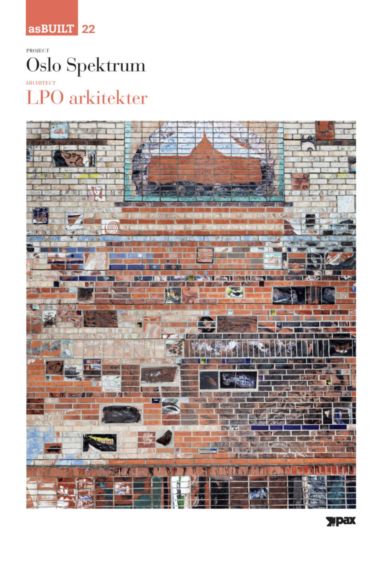 Spektrum, opened in 1990, was conceptualized and realized as Byhallen - a multi-purpose .Urban hall - needed as infrastructure in the urban core of Oslo. This volume of asBUILT presents the full set of drawings together with a selection of historical and contemporary photographs of this iconic centre of Oslo events.

In 1982, LPO, a newly established practice of architects recently graduated from the Oslo School of Architecture, won the competition for the transformation of the late nineteenth century Vaterland area, north of Oslo Central Station. In his essay, Halvor Weider Ellefsen - architect, PhD and associate professor at the Oslo School of Architecture and Design - states: .For LPO, the plan was like a zoological garden of animal buildings, all with different habitats, needs and skills, linking the east and west of the city. For the municipality, the project manifested a high-profile, mixed-use, high-density urban design that pushed all the right buttons - retail, offices, housing, infrastructure attractions, and an image to bolster the capital's identity. The inside of the Spektrum-animal should be regarded as a prolific part of Oslo's public interiors, a civic building fit for festive mass-events. As a part of the urban pattern, Spektrum stands out as a .tattooed building, the curved facades wrapped in a continuous art-work by Guttorm Guttormgaard and Søren Ubisch. The carpet of painted ornamental bricks links Spektrum to another major Oslobuilding, Arneberg and Poulsson's brickwork on the Oslo Town Hall (1931-50).