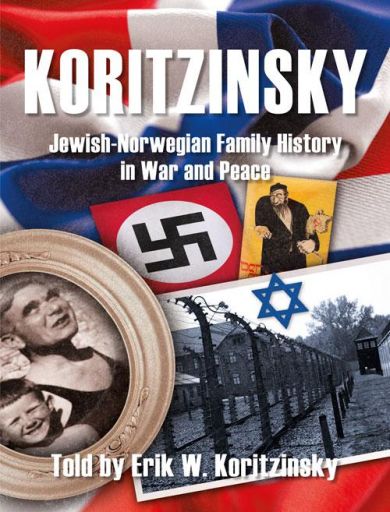 Sidsel Levin, founder and former director at Oslo Jewish Museum.
Koritzinsky - Jewish-Norwegian Family History in War and Peace is a new book which mediates knowledge and insight about Norwegian-Jewish life and history. On the one side, Erik Koritzinsky tells the story of his Jewish father's family, their migration, establishment, integration, and partial assimilation from the 1880s onward. On the other side, is his mother's Christian family's rooted history. In this span the life of the family unfolds, problems and the outcome of this history is marked by this.
The book is not simply a family chronicle. Koritzinsky simultaneously writes the story of his own upbringing and biography. He paints a picture of a dutiful relation to his mother who raised five children by herself, and the devastating loss of the skilled attending physician father. Both with the war as its dark backdrop. The rich photo material especially from earlier times is unique in light of the pervasive loss of personal property suffered by the Jews in Norway at the hands of the Nazis.

Nina Grünfeld, filmmaker and movie director, with particular focus on the faith of Jews during the Second World War.
Erik Koritzinsky (84) embarks on a cruise which turns out to be so boring that he instead of staring out at the ocean, sits down and writes a long contemplated book. The starting point is a Jewish emigrant family from Poland and a wealthy Christian merchant family from Nord-Møre and Trøndelag, five children are born just before the outbreak of the Second World War. All five children are so-called mischlings, a mix with one Jewish and one Christian parent. All are threatened by Hitler's plan to exterminate them.
Against this backdrop, Erik takes us into a richly illustrated family chronicle about anti-Semitism in the 1930s, childhood in the wake of the war, identity and religious belonging, bourgeoisie and facade, city and countryside, to
4 stars
4 av 5 stjerner (1) 4 0 5 1
5 stars
0%
4 stars
100%
3 stars
0%
2 stars
0%
1 stars
0%