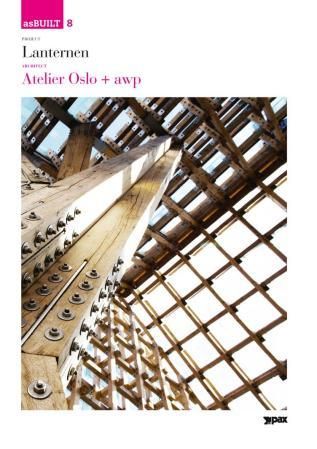 Se flere produktegenskaper
399,-
Lantern (The Lantern), was built as an urban pavilion, an architectural artifact with no specific program adding to the regeneration of the main street of the small city of Sandnes. The pavilion was part of the event Norwegian Wood (2008), celebrating a millennium of inventive wooden architecture.The basis for the production of the built structure was a three-dimensional model containing information about every technical and geometrical aspect. The model was distributed to consultants and sub suppliers, who extracted from it all the necessary information. Thus,the responsibility for producing the technicaldocumentation was transferred from the architect to the producer.The young architects of Atelier Oslo and AWT(Paris) presented a strikingly simple concept: A barn-shaped roof covered with glass shingles raised above a public space on load-bearing clustered columns that also brace the structure. The columns comprise oak beams joined at eye-level to form a trunk-like shape, spreading out under the canopy of the roof, like the crown of a tree. In his essay Børre Skodvin elaborates on Lanternen as a kind of structural eclecticism reflecting a time when diverging ideals and interests are cultivated rather than problematized. Cutting off the branches of the tree is an irrational and destructive act, which is beautifully counterbalanced by the intelligence and meticulous rationality, displayed when putting the branches back into place.
Flere i samme serie
Merk produktene som skal legges i handlekurven
×