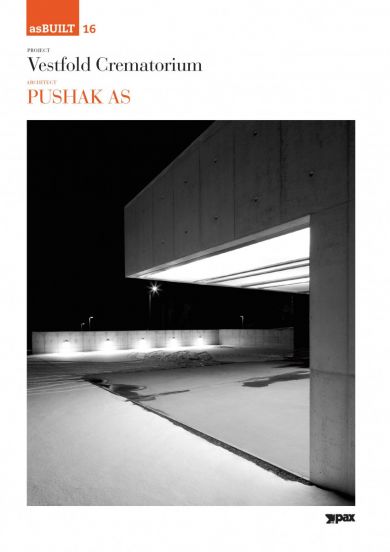 Se flere produktegenskaper
Tilbudspris 348,- Ordinær pris 399,-
In the ever more profane Scandinavian societies rituals of death have gradually been relocated from the religious sphere and the spaces of churches, spurring a continuous search for new ceremonies and rooms. The importance of these changing rituals is indisputable, and thus designing spaces that resonates with the gravity of these rites has
become an imperative architectural task. Faced with the technicalities and practicalities of the burning of human corpses on one side, and the vastness of death on the other, the architects have chosen a truly inspired strategy: as all the rooms of the cremation procedure are opened before you, one by one, there is also always a way out, Ingerid Helsing Almaas observes in her essay on Pushak Architects' Vestfold Crematorium (completed in 2010): The challenge offered by this building is in the openness: you can follow your dead all the way. See everything. Take part in everything.

Pushak Architects won the open competition for this crematorium with a bold proposal immediately after the office was established. Often, young ambitious architects with a correspondingly ambitious winning project succumb to the inevitable conventionalizing powers of the building industry. Not so in this case; the clever and impressive realization of this building makes it a prime object for documentation in asBUILT.

Ingerid Helsing Almaas is an architect MNAL and a senior advisor with DogA (the Norwegian Centre for Design and Architecture). She was editor of the Norwegian architecture review Arkitektur N from 2004 to 2017.
Flere i samme serie
Merk produktene som skal legges i handlekurven
×