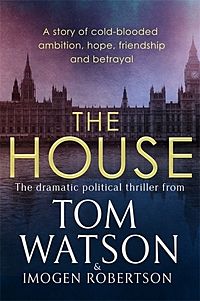 Se flere produktegenskaper
229,-
In their remarkable debut political thriller, Tom Watson, former Deputy Leader of the Labour Party, and Imogen Robertson open the doors to The House, a place of ambition, hope, friendship . . . and betrayal.Once allies, Labour MP Owen McKenna and Conservative Minister Philip Bickford now face each other across the House of Commons as bitter enemies. Then the reappearance of a figure from their past forces them to confront the choices that led to the tragic downfall of their former housemate, Jay.Late one night, Owen receives a visit from a lobbyist who promises to protect him from the consequences of his actions in exchange for one, small favour - or to have his reputation and career utterly destroyed if he refuses. But that favour will sell out everything Owen believes in.As rivals gather and whispers of wrongdoing fill the corridors of Westminster, it's clear that someone knows the truth about Jay's Icarus-like fall from grace. Now, the former friends must face one terrible truth...Someone is responsible, and a reckoning is overdue.
Flere av samme forfatter
×