the what, whence and whither of French masterpieces in Norway 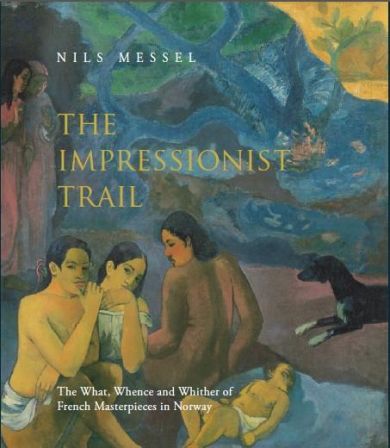 Se flere produktegenskaper
Tilbudspris 348,- Ordinær pris 398,-
The Impressionist Trail tells the story of how modern French art came to Scandinavia around the time of World War I. While continental Europe was in flames, the neutral north experienced unprecedented economic growth. Scandinavians bought art like never before, by artists such as Delacroix, Courbet, Cézanne, Manet, Degas, van Gogh, Gauguin, Matisse and Picasso. In an amazingly short time, the Friends of the National Gallery in Kristiania (Oslo) gave the museum a great many works that still form the famous core of our European art collection. Sensational exhibitions of modern French pictures were held in museums and private galleries. Societies for promoting French art were established in Scandinavian capitals. Splendid solo exhibitions were organised, mainly with works from new private collections.
But this situation was short-lived. Financial realities in the early 1920s caused many Scandinavian collectors to go bankrupt. The first works to be sold off were French, and mostly to deep-pocketed Americans. A new wave of nationalism in the Interwar years in Scandinavia also caused collectors' interests to shift towards Nordic culture and ideas. Today we find French art - once upon a time in Norway - scattered to the four winds, to North and South America, Japan, Australia, Italy, Germany, France, England and Dubai. Most of the works were sold in the 1920s, but some stayed for decades. The last painting was sold in New York in 2017.
Only the pictures in the National Gallery are still in Norway.
Flere av samme forfatter
×