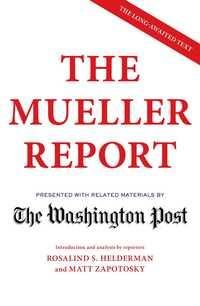 The only book with exclusive analysis by the Pulitzer Prize-winning staff of The Washington Post, and the most complete and authoritative available. Read the findings of the Special Counsel's investigation into Russian interference in the 2016 election, complete with accompanying analysis by the Post reporters who've covered the story from the beginning. This edition from The Washington Post/Scribner contains: - The long-awaitedReport On The Investigation Into Russian Interference In The 2016 Presidential Election -An introduction by The Washington Post titled A President, a Prosecutor, and the Protection of American Democracy -A timeline of the major events of the Special Counsel's investigation from May 2017, when Robert Mueller was appointed, to the report's delivery -A guide to individuals involved, including in the Special Counsel's Office, the Department of Justice, the FBI, the Trump Campaign, the White House, the Trump legal defense team, and the Russians -Key documents in th
×